Today I have felt utterly spoilt in that I was taken out for the day by artist, Lennart Sundqvist. He spotted that I liked birds and offered to show me a place which is famous for its migrant species. Along the way we stopped to visit his home in his own forest, to see his garden and to meet his cats. A very peaceful and inspiring place. I mentioned that I had really enjoyed the Jan Töve’s exhibition at the Abecita Konst Museum and it turned out that he was a good friend of his and lived in the area. We called in to see him but he was just going out and asked if we would drop by later.

On our way to the bird reserve, Lennart took me to a beautiful old railway station where they still have a traditional restaurant offering a smörgåsbord. Thursday’s menu was heavy on the meat but I was still able to taste many different salads and potato dishes. Sweet pancakes were on offer too but we had places to go and people to see so we stuck to the coffee and biscuits.

Our next stop was the ancient burial site at Ekornavallen. People have been gathering there to bury their dead since the bronze age.

There is a traditional old farm nearby and many of the modern timber houses have the same structure and shape. 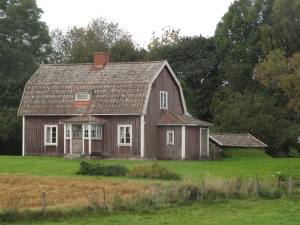 We were just getting into the car when a flight of birds flew over. They were quite beautiful and I assumed that they were geese. It is only now, on closer inspection, that I have realised that they are a flock of the famous cranes that we tried but failed to see when we finally got to the lake!

The lake is called Hornborgasjön and the cranes arrive in their tens of thousands each spring to breed. Hundreds of people come to watch them ‘dance’ at the lake. It was a beautiful place but rather windy and cold and many of the birds were far out on the lake today. We did use a telescope and binoculars and were able to watch some of the geese and ducks though.

After returning to the car, Lennart asked if I’d like to visit his friend Inga and see the beautiful garden that she has made. It was quite an amazing place that she and her husband created from scratch and featured many specimen trees and plants, wonderful rockeries using the local stone and water features . Whilst we were looking around, a vast assortment of small birds were coming and going and a brown squirrel chattered noisily at us.

Our last port of call was to Jan and this time he was ready for us with a warm welcome and biscuits! He and his wife made us feel totally at home and besides showing me his home, studio and some of his photographs, they also showed me which mushrooms are safe to pick and eat, their gorgeous dog and they took us down to the stables to meet their daughter and her horse. Jan was well known as a wildlife and nature photographer for many years and now he is taking time to explore further his ideas on nature, humankind and society and the interactions between them. Do follow the link and take a look http://www.jantove.com/ For me, some of his photographs have the same beauty and simplicity that you find in the best haiku poetry.

So, a complete rest today and a big thank you to Lennart for his kindness and conversation. Tomorrow I will be back in the studio and no doubt up in the forest at some point!