It’s been a few days since I wrote my blog. This has mainly been because I’ve been really busy and every evening I think I’ll sit down and write a post but by the time I’ve cleared up in the studio, it is usually almost midnight and I’ve been too tired. Anyway, enough of the excuses! Last weekend was Open Studios in Borås and Ålgården hosted an exhibition in the gallery with one piece of work from every artist taking part. The preparations for this took the best part of three days running up to the weekend and the studios were a hive of activity. The event opened with a ‘vernissage’ (or preview as we call them in England) with lots of artists and art lovers gathered together round flaming braziers for a bit of hobnobbing whilst inside the gallery a rather avant garde band called The Soil Collectors played.

One of the artists from Ålgården had decided to hold his open studio in the intaglio studio so it became out of bounds for the best part of three days. What with that and the fact that the place was buzzing all weekend, work was out of the question and I decided that I would take myself off to Gothenburg for the day. Easier said than done as it took me an hour of walking in the torrential rain to find the train station. I then bought my ticket from a machine and waited on an empty platform until five minutes before departure when I got suspicious about the lack of other travellers. I asked a man (who was going through some bins!) where the train was. He pointed to the bus station and it turned out I’d bought a bus ticket. Luckily I found the bus and managed to get on it just before it departed! Arrival in Gothenburg was a big relief because for a start…it was not raining! I spent a lovely day wandering around the Art Museum and Hasselblad Centre where my favourite things were a really interesting photographic exhibition about racism by Sasha Huber http://www.sashahuber.com/ and a great ceramic show by Klara Kristalova http://www.kristalova.se/ I did a quick tour through the various periods of Scandinavian art (nice to see some of Carl Larsson’s in the flesh) and had a longer look at the contemporary paintings and sculpture. I also visited Grafik i Väst http://ramverk.se/giv/ which is a gallery and organisation of 259 printmakers. I managed to catch the opening of the Palle Nielsen exhibition and picked up a few of their annual catalogues. It has been really interesting to see the work of so many Scandinavian printmakers over the last few weeks. 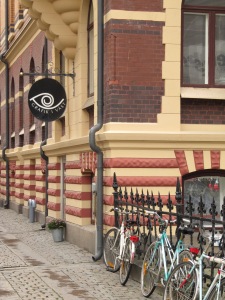 After another exhibition opening of an Ålgården member, Maurits Ylitalo, I spent the rest of the afternoon wandering round the very interesting and hip Haga district. 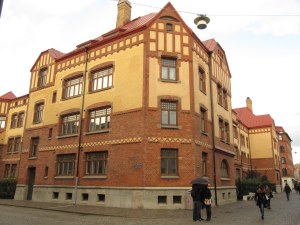 I finished my day with an hour sat on the harbour wall soaking up the sun (I’d almost forgotten what it looks like!) and watching the ferries come and go. 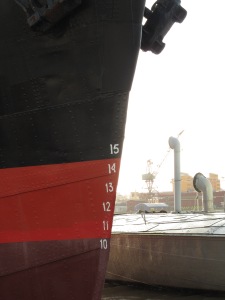 Sunday was spent visiting Sirgitta’s studio, running and generally keeping busy until I could get back to work. I’ve decided to continue to spend at least some time in the forest every day whatever the weather. I want to really get the atmosphere under my skin and build up a vast archive of photographic images (and some drawings) so that I have lots to work from when I get back home. I’ve had some really wet and fun runs in almost darkness with owls hooting and only the reflected dying light in puddles to guide my way!

In the studio, for the last couple days I’ve mainly been wrestling with carborundum! I’m happy that I’ve made a good start on depicting the birch forests and I am confident that I can explore that further when I get home but the pine forests have been eluding me! They are so dark and atmospheric that I thought carborundum grit would be a good medium to use. I’ve had some success with it in the past and it is possible to get an almost mezzotint-like feel to the prints. Unfortunately, I haven’t had access to my usual materials and so have been experimenting with new kinds of card base plates, different kinds of glue and there has been no foam roller to apply the glue evenly. It’s all part of the spirit of the residency. I’m here to experiment and try new things but it has meant that results have been rather frustrating. After having spent the last two days making plates, proofing, remaking plates, reproofing, still the results are awful and I’m calling time on it for now. I will go back to it when I am back in the UK. There is no point trying to reinvent the wheel when I know I can get the results I want using the materials I have at home. Hey ho!

I did manage to get a reasonable print from a collagraph plate that I made last week. It is intended to give something of the feeling that I get when I stop and listen to the birds in the forest. I’ve realised that if I stand really still, the birds start flitting about around me and soon there can be over twenty tiny chattering blue, great and willow tits as well as finches and often a couple of gold crests. It really is quite magical. The print is just a proof and I will work on the idea further when I get back but I think it has potential. 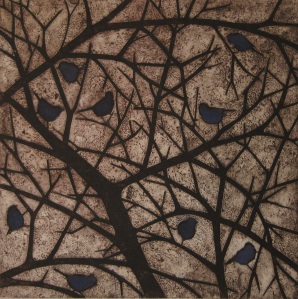 I will end this post here and come back tomorrow with an update on some possible developments with photopolymer. It is a material that I use already but I have taught myself the basics from a book and have never known how to use it to its full potential. This could be a bit of a break through for me and I’m really excited!