Today I spent the second of my three days as ‘artist in residence’ at Alverton Gallery in Penzance. I was invited to come and print in the gallery by Diana and Tim Wayne, the artist owners. The idea was that a team of printmakers would come and work in the gallery using their fabulous press during the exhibition of printmaking at Penlee House Gallery and Museum. The exhibition is called ‘Edward Bouverie Hoyton (1900 – 1988): Master Etcher’ and focuses on the work of this ‘unsung hero of printmaking’ who was principle of Penzance School of Art from 1941 – 1965. 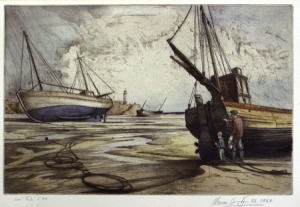 Hoyton was born in Lewisham in 1900 and studied printmaking at Goldsmiths College of Art. His contemporaries included Graham Sutherland, Paul Drury, Eric Frazer, Robin Tanner and William Larkins. Collectively known as ‘The Goldsmiths Group’, these artists helped to revive the art of the master etcher, the craft of original hand-made prints that had been largely overtaken by mechanical, mass-production printing methods. Their inspiration was the Nineteenth Century artist Samuel Palmer (1805 – 1881), whose etchings had created a sensation when they were exhibited at the Victoria and Albert Museum in 1926.

In 1926 Edward was awarded the Prix de Rome. He went on to become a lecturer at Leeds College (1934) before taking up his post as Principal of the Penzance School of Art. 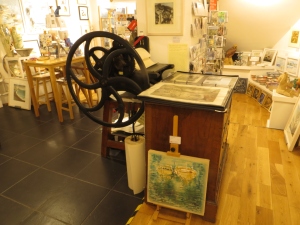 The Alverton Gallery press used to belong to Edward Bouverie Hoyton and is an absolute beauty. I am one of a series of printmakers that will put the press into action from 18th January until 22nd March 2014. Other printmakers include Claire Benson, Carolle Blackwell, Judy Collins, Delia Delderfield, June Hicks, Ian Laurie, Roy Perry, Morna Rhys, Lee Stevenson, Diana Wayne & Peter Wray.

Today I’ve been printing up some of my mini-prints including ‘Ermine’:

I’ve also used the opportunity to do some viscosity printing. A method pioneered by Joseph Hayter and also known as ‘The Hayter Method’. The process uses the principle of viscosity to print more than one colour onto a single plate as opposed to using multiple plates and colour separations. Three to four inks are mixed to different viscosities by adding uncooked linseed oil (to oil based inks). Collagraphs can really lend themselves to this method because of the sculptural nature of the plate making but it can be done on etching and aquatint plates too. The printmaker also uses different densities of roller to aid the process. Here are a few examples, I call it ‘bling’ printing 🙂

Apart from having some lovely company from Tim & Diana and the various visitors to the gallery, I also had a bit of interest from Coco and Fly, the gallery whippets. It’s been raining a lot here in Cornwall and so they were quite happy curled up under the desk all day!

I’ll be back in the gallery tomorrow and will do some more viscosity printing and also print up some of my other collagraphs. Come in and see me if you are in the area!