I started this post whilst I was still at Ålgården but I had so much to do before I left that I never got the chance to finish it so here it is! The final days of my residency were quite intense but very satisfying. On Sunday I successfully exposed my latest graphite drawing as a photopolymer plate. Here is one of the first proofs. I forgot to mention the fact that all my prints are being printed onto cream Hahnemüle paper which accounts for the slightly pink/cream looking photos

I’ve been a bit obsessed with puddles in the forest and wanted to capture something of the feel of the pine forest after the rain.

It was also a beautiful afternoon on Sunday so I went for a long run with my camera to try and get as many photos as possible. I have built up a really good image bank that I hope will help me to continue my Swedish work during the winter months in the UK. 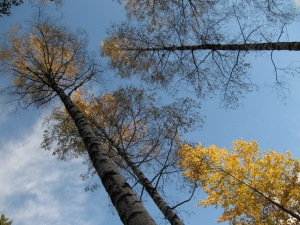 I then went into the studio with the intention of making some small monotypes of the autumn colour in the birch forest. However, I found myself making an enormous grey (not even black) monotype of the birches and it took me ages. I was so tired that I almost gave up on it but forced myself to finish. I think I wanted to make the most of having access to the huge press but it was a bit of a mistake. On Sunday night I thought it was an awful print but I looked at it in the cold light of Monday morning and it wasn’t so bad and will be useful as a reminder of things now that I am back home. Although it hasn’t travelled too well and will need resoaking. I packed all my prints up very carefully and they were fine but this was so big that I had to roll it and stow it in my case. Needless to say it is now squashed flat!

On Monday Ida Brogren, artist and illustrator http://www.syskonenbrogren.se, arrived with her camera and she took photos of me exposing the monotype transparency onto the photopolymer plate. Here are the two transparencies stuck together (there is a lot of overlap of ink). 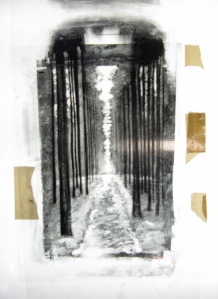 Following all the steps described in my previous post, we exposed and developed the plate. I also exposed an identical plate using the same timings but using the aquatint screen that Björn had given me to see what the difference was. This is a picture (taken by Ida) of Christina and me examining the screens.

I’m chuffed to bits with the proof prints! (Here is the one made from the plate using the studio’s aquatint screen: 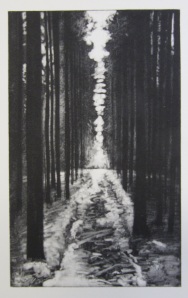 and the one made using Björn’s screen: 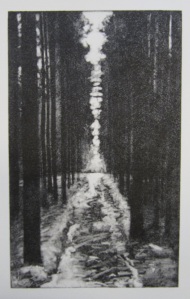 The dots on the above screen are more open and so you get a rougher and more grainy effect. It would be interesting on certain prints though and it is great to have it to start me off. Björn has also given me the details of the man in Gothenburg that makes the aquatint screen that I used. It would be a good investment for me to order one from him once I have made my lightbox.

I spent the rest of Monday printing and organising all my stuff for transporting back to the UK. I then found out that Modhir Ahmed was coming back to Ålgården to film people looking at his exhibition and then sharing their thoughts on his paintings. He arrived in the late afternoon and Ida stayed behind to help with the filming. She also made a beautiful meal for us of pea soup with creme fraiche and caviar with olive ciabatta and her friend arrived with the most delicious apple cake. It was a nice surprise because I’d intended working through and just snacking on a bowl of cereal! 🙂

Once we’d eaten, Modhir insisted that we were filmed looking at his paintings. I have to admit that I was a bit reluctant due to the large amount of work that I wanted to do on my last night but I managed to say a few words that I hope were meaningful before scuttling back to the studio. It got to about midnight and I decided that I needed to wind down a bit so I went to the lithography studio and made some acetate screens to take back to England. You may remember that this involves using a large and a small lithography stone with carborundum and water and it is a meditative thing to do. I made four which took about 25 minutes so I felt quite relaxed by the time I went to bed.

Tuesday was my last day at Ålgården and I was determined to say goodbye to the forest so I went for a 5 mile run in the rain. It was lovely with lots of jays and nuthatches flying about and I saw the friendly woodsman and was able to say goodbye to him too. I got back to the studio and Modhir Ahmed had a surprise in store in the gallery. He wanted us to come and look at his exhibition and in the night he had painted over all of his paintings in black and chalked a single English word on each. It was something of a shock but exciting too. He is a very interesting and well-respected artist in Sweden, full of ideas and energy. I found an article on the Ålgården facebook page that talks about it: http://www.bt.se/kulturnoje/konst/konstkuppen-malade-over-tavlorna%283472160%29.gm

I wasn’t able to do any more work but had the whole morning to pack everything up carefully and prepare a couple prints that I wanted to give to Christina and Björn and also one for Lennart who arrived just in time for my farewell lunch. He and Ute had made a print together for me too, I was really touched. Björn made veggie spaghetti bolognese and eight of us sat down to eat together. Then it was time to say goodbye 😦 Anna Mattsson kindly drove me to the airport and it was really good to spend the time with her. I managed to get through the luggage check in even though they had to mark my bag as ‘heavy’ and send it down the oversize baggage chute. They also let me on with a very heavy rucksack as hand luggage and a large parcel of prints. I was quite surprised but the plane turned out to be half empty so perhaps they were being generous with regards to the usual baggage restrictions.

I will really miss everyone that made me so welcome at Ålgården and I will also miss the fantastic opportunity to immerse myself in my printmaking without the pressures to teach or sell my prints. I already feel that it has been an extremely valuable time and I suspect that it will have a profound long-term effect on my printmaking and the way I view my work. Being amongst other professional printmakers in well-equipped studios exchanging ideas and learning new techniques has all the best attributes of being at art college but with the added maturity and insights that come from actually making a career from your artistic practise. I’ve been through some low points and some self-doubt but I have also reaffirmed the fact that printmaking is what makes me tick and is how I want to make my images. I find it exciting that, after eighteen years of printmaking, I am just scratching the surface of what can be done in one small area and now the photopolymer combined with my monotypes could be a whole new avenue for me to explore.

I now have a really hectic couple of months with at least seven group exhibitions to prepare for and two printmaking courses to teach but I have light at the end of the tunnel in the form of the quieter months of December, January and February. I usually find this time quite uninspiring and my creativity is often at a low so I tend to just use it to restock my editions and prepare for the coming months but this winter I want to consolidate some of the ideas that I have had in Sweden, make further prints based on my experience of the forests and explore photopolymer printmaking further and see where that takes me. I need to build a light box but I have good advice from Christina and Björn as well as a good book on the subject and a friendly contact in the form of Rebecca Vincent at Horsley Printmakers (check out her lovely monotypes and etchings http://www.horsleyprintmakers.co.uk/rebecca_vincent.html).

I’ll continue to write here so please do check back in the future to see what I’m up to. Oh yes, I’m already considering the possibility of returning to Sweden once I’ve developed my ideas a bit further and also I am hoping that Art Connections will be able to develop their link with Ålgården. It would be great to see some of the Swedish artists in Yorkshire in the future and perhaps we could collaborate on something. Before I sign off for now, I’d like to say a huge thank you to everyone at Ålgården who made me feel so welcome and have become friends and also to Christine Keogh and Rick Faulkner at Art Connections for giving me this opportunity, it’s been just what I hoped for and more!